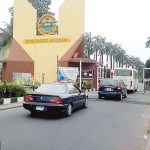 LAGOS – A Vigilante group on August 30 rescued an attempt to kidnap a University of Lagos staff, Mrs. Abosede Adeleke, 60, along Oshodi express way.

According to Mrs. Adeleke, who narrated her ordeal after she was rescued by the Vigilantes on duty around the area said that she and her daughter (Ms Oladejo Yetunde Adeleke) and her granddaughter (Ebehiremen Ahianba) have been living in fear since 2017 following the disagreement between the daughter and her estranged husband (names withheld).

Mrs Abosede, who suspected that her kidnap attempt was the handiwork of her daughter’s estranged partner appealed to security agencies to come to her family’s aide from torture by a cultist, who she said is also a prominent politician (name withheld), decrying that the entire family has, especially herself and the granddaughter, have been living in fear due to threats to their lives by her estrange in-law.

Narrating her ordeal on her recovery bed at the Lagos State General Hospital, Abosede told reporters how some unknown heavily armed men barged into her house on the 14th of October 2017 asking for the where about of her daughter and grandchild which at the end, resulted to her sustaining a grievous wounds with her sister’s son who came visiting.

She added that this, in turn, raised her fear of losing her daughter and grandchild if they were both eventually found.

Giving a detailed account of what truly transpired between the politician and her daughter, she said that her daughter discovered some exhibits of different types and some incriminating items in their house in Ajao Estate isolo Lagos which prompted her to report the matter to the police, stressing that this has been the major issue amongst the various domestic violence, torture, rape, abuse, physical and emotional trauma her daughter went through while in the relationship.

“My daughter and I have been living in fear since the discovery in 2017,” she further explained in tears.

On why she was in the hospital, Mrs Adeleke said she was abducted in a van on her way to work on the 30th of August 2019 and was later pushed down from the moving van when the abductors realised they were followed by another van which happens to be the Vigilantes on duty in the area.

The 60 years old passed out immediately she was pushed down from the moving van and was later resuscitated at the General Hospital.

Mrs Adeleke told reporters that the only thing she could remember was how she was questioned of the where about of her daughter and granddaughter before she was pushed out of the moving van.

Mr Abdulaziz, the head of the vigilante on duty in the area on the said day further gave details of the abduction after being interviewed by reporters.

He said they noticed a van parked under the Oshodi Bridge for almost one hour and noticed that the abductors lunched attack on sighting Mrs Adeleke at about 6:45am on the 30th of August 2019.

Mr Abdulaziz, who immediately radioed his colleagues about the situation, followed the van and rescued Mrs Adeleke after being pushed out of the van.