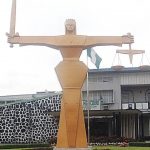 Benson, whose address was not provided, is facing a two-count charge bordering on conspiracy and felony to wit stealing. The defendant, however, pleaded not guilty to the charges.

The prosecutor, Sgt. John Iberedem, told the court that the defendant committed the offences on July 13, at 12a.m., at Devs Cartola Ltd MTN mask, inside Benson Estate, Ikorodu.

He said that the offences contravened Sections 314 and 287 of the Criminal Law of Lagos State, 2015 (Revised).

The chief magistrate, Mrs F.A. Azeez, admitted the defendant to bail in the sum of N800,000 with two sureties in like sum.

Azeez said that one of the sureties must have a landed property, be a blood relation of the defendant, show evidence of LASTRA registration and must be gainfully employed. She adjourned the case until Nov. 11, for mention