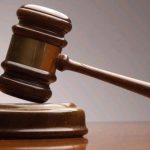 A 23-year-old man, Felix Ejeh, was on Friday brought before an Ogudu Magistrates’ Court in Lagos for allegedly stealing a laptop, valued at N70, 000.

Ejeh accused also of stealing N103, 000, is facing a two-count charge of breaking and entry and stealing, NAN reports.

The Prosecutor, Insp. Lucky Ihiehie, told the court that Ejeh committed the offences on Aug. 27 by 8:50 p.m. at No. 107, Ogudu Road by Pako Bus Stop in Ogudu, Lagos.

Ihiegie said that Ejeh broke and entered the office of one Owolabi Otenuga with intent to commit felony.

The defendant, however, pleaded guilty to the charges.

The Magistrate, Mrs Ejiro Kubeinje, adjourned the case until Sept. 18 for facts and sentencing.