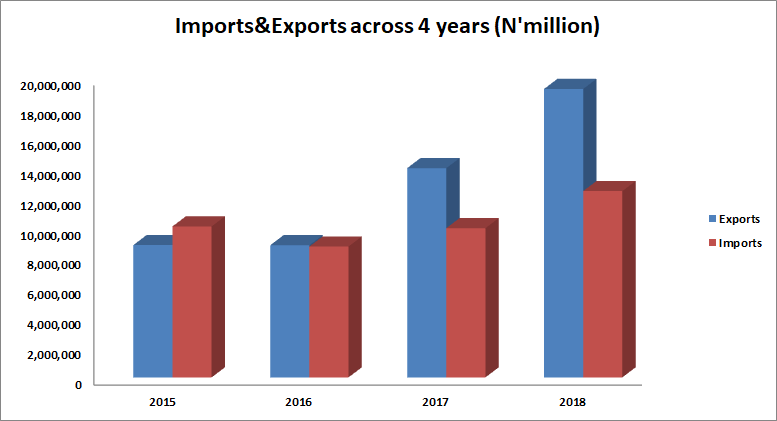 In his seminal work entitled ‘Principles of Economics’, Havard professor Gregory Mankiw established 10 principles guiding economic decisions. The fifth of the 10 principles, which is of interest in this piece, is that trade can make everyone better off.  In simple terms, it means that a country stands to gain when there is an exchange of goods and services with other nations. If Nigeria cuts itself off from importing food, it must grow its own food to feed the citizens.

Nigeria is a country that is blessed with enormous human and natural resources.

From Limestone to timbers and cash crops such as cocoa, Africa’s most populous country has comparative advantages in several commodities which previously earned her huge foreign exchange and boosted non-oil revenue.

But how is the country faring in terms of trade? Nigeria exported goods worth N8.85 trillion in 2015, but imported products valued at N10.09 trillion, according to the Central Bank of Nigeria (CBN)’s trade data. In 2016, imports were N8.74 trillion while exports amounted to N8.83 trillion.

It must be stressed that oil and minerals often dominate Nigeria’s exports to up to 85 to 95 percent. So, the export numbers mostly do not tell the whole story and does not mean that the country is doing well in international trade.

Nigeria’s total non-oil export earnings from more than 25 commodities in 2018 were $3.3 billion (N1.19 trillion), according to the National Bureau of Statistics (NBS), but Bangladesh, once one of the poorest countries on earth, earned almost ten times as much as that from exporting one product —textiles. Nigeria’s  non-oil export figure is just 6.2 percent of the CBN’s export numbers in 2018—an indication that Nigeria is not getting much value from non-oil exports.

One major reason is that the country’s exporters ship out mainly raw products and get little in return.

“The Nigerian farmer produces cocoa and sells it abroad, but we find is that at the end of the day, the guy who converts the cocoa into chocolate makes 90 per cent or more of the total value while the guy that produced the cocoa makes 10 per cent or less,” Mansur Ahmed, president of  the Manufacturers Association of Nigeria. (MAN), said at an annual general meeting (AGM) recently.

For many years now, cocoa has become Nigeria’s flagship export product, occupying 20 to 30 percent of the total non-oil export value.

China’s annual industrial output exceeded 30 trillion yuan ($4.4 trillion) for the first time last year. Bangladesh and India alone produced exportable fabrics valued at $32.92 billion and $37.4 billion respectively. This does not include other products.

Manufacturers in Nigeria provide virtually everything on their own. Cost of production is high, making their products expensive in the global market, according to Ede Dafinone, chairman of MAN Export Group.

Forty percent of manufacturing expenditure goes to alternative energy. Manufacturers spent N262.77 billion on alternative energy sources between the second half of 2016 and the second half of 2018, according to data from the Manufacturers Association of Nigeria (MAN). This is over 100 percent higher than what was incurred in the previous four halves. Manufacturers told BusinessDay that logistics costs have risen by 50 to 100 percent in the last two years, owing to poor state of roads and lack of good transport system.

Firms bringing in raw materials into Apapa ports and those exporting commodities abroad have seen their costs swell on rising dwell time, which results in high demurrage charges.

The borders are currently closed, which, though checks smuggling of petrol and rice, hurts import of raw materials.

“I understand that the government has closed the borders in order to catch those who are smuggling various goods into Nigeria,” Dafinone, earlier cited, said.

“It is unimaginable that a solution could not be found to this problem that did not penalise all genuine traders (importers and exporters alike) for the sake of catching those smugglers operating through the land borders,” he said.

“Who will be responsible for the additional demurrage to be paid or on the perishables that have now spoilt? The government would not be closing all banks because of the discovery of bank fraud and similarly should not close all land borders to catch those that are smuggling,” he reasoned.

Funding is also a crucial issue. Nigeria’s benchmark interest rate is among the highest in Africa at 13.5 percent. Ethiopia’s is 7 percent;  Kenya is 9 percent;  South Africa is 6.75 percent;  Zambia is 10.25 percent, and  Cameroon is 4.25 percent.

Similarly, Rwanda is 5 percent; Mauritius, 3.5 percent;  Algeria is 8 percent, and Senegal is 4.5 percent. Manufacturers are asking the Federal Government to recapitalise especially the Bank of Industry, which provides single-digit funding to them. Doing this, they say, will increase lending to the real sector.

Among methodology considered were starting a business, dealing with construction permits, getting electricity, registering properties, which formed the core of the analyses for Nigeria.

One of the major challenges Nigeria will have to deal with is that of retaining and attracting more foreign direct investments into the country.

Analysts fear that foreign direct investors may be drawn to other African countries with better ease of doing business compared to Nigeria with free trade knocking. AfCFTA.

The truth is that Nigeria has a number of trade agreements that it is not benefitting from. The Common External Tariff (CET) in West Africa has failed Nigeria, with a number of companies biting their fingers.

After 19 yrs of African Growth and Opportunities Act (AGOA), which allows 6,000 products to be exported to the US duty-free till 2025, Nigeria is yet to raise its export substantially to the world’s biggest economy.

In 2014, Africa’s biggest economy exported goods worth $2.6 million to the US, while South Africa exported in excess of $1.2 billion dollars. Export from Nigeria to the U.S. is even lower today owing to issues around standards, quality and poor organisation.

Brent Omdahl, commercial Counsellor, US Consulate, Lagos, told BusinessDay in an exclusive interview that participating countries, including Nigeria, need to understand the concept of AGOA, saying that, being a participating country does not mean not following due processes.

Omdahl said products exported to the U.S. would still undergo and pass through necessary regulatory tests, among which are phytosanitary regulations.

“There are some minimum standards that countries have to adhere,” he said.

“Zero duty access does not mean you have to just start exporting. You have to organise yourself.

“In exporting agricultural products, for example, such products would have to be subjected to all of the Food and Drug Administration (FDA) regulations and comply with sanitary and phytosanitary regulations.”

Omdahl said the U.S. government, through the US Agency for International Development, has some small resources available to help companies locally to develop their expertise in order to take the advantage of AGOA.

Omdahl said it is unfortunate that crude oil has benefitted from the AGOA initiative most, which is against the original intent of the act.

He said the intention of AGOA is to create the pathway for a country like Nigeria to move up the value chain.

“It is the Nigerian industry that needs to organise itself,” he said.

Recounting lessons US-Vietnamese bilateral agreement, which is similar to AGOA, Omdahl said Vietnam does a very good job by adding value to their products in order to meet up with the U.S. standards.

In doing this, Vietnam attracted investments from Taiwan in the textile sector in order to develop their textile industry and take advantage of export opportunity to the U.S., he explained.

The country equally developed its furniture sector and even started importing some hard woods from the U.S. to augment existing local woods, turning them into furniture and sending them to the U.S. to sell in big outlets, he added.

“With this arrangement, Vietnam created wealth and employment,” he said.

Omdahl said Nigeria has a lot of products that can make it to the U.S. markets if properly harnessed and improved upon.

“Nigeria needs to look inwards to find those products, develop them, increase their value addition, export them, and through that, create wealth and employment for the country.”

“So, the question for Nigeria is, what are the products that are going to do that? I can think of some. Talk about the shoes. There is a history of making shoes here. The sky is really the limit,” he concluded.

Today, Nigeria has bilateral trade agreements with China, India, the Netherlands, Italy, the U.S and many others, but they export more to the country than they import. In fact, they export mainly finished products usually obtained from Nigeria’s raw materials.

More so, products and commodities from Nigeria are rejected  because of issues around quality and non-adherence to standards.

Experts envisage that with AfCFTA imminent, the country could be pushed to gain more from trade by specialising in areas of comparative and competitive advantages such as palm oil milling, cocoa processing, and rubber processing, among others.

“For Nigeria to benefit from the deal, the country needs to tackle the electricity challenge that is weighing down on firms’ capacity to produce,” Gbolahan Ologunro, an Equity research analyst at Lagos-based CSL Stockbrokers, said.