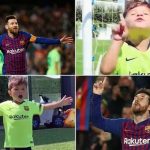 Mateo Messi, the 4-year-old son of soccer star Lionel Messi, recently scored a goal and copied his dad’s celebration after drilling the attempt.

Messi’s wife Antonela Roccuzzo posted a video of the sequence Wednesday on Instagram. Mateo was celebrating his birthday. He is the middle child in the Messi family. Messi’s oldest son is Thiago, 6, and his youngest is Ciro, 1.

“Happy birthday my love,” Antonela wrote for the caption on the video. “Just wish you to be happy all your life and never stop being that cute character that makes our lives happy.”

Mateo sported an FC Barcelona jersey and placed the ball on the penalty spot during the sequence. He took a few quick steps to the ball before belting a right-footed shot into the net. Mateo let out a celebratory scream before kissing his hands and raising them to the sky. He then did the sign of the cross.

Antonela also included photos of Mateo and Ciro in the social media post, which had nearly 1.5 million likes by Thursday morning.