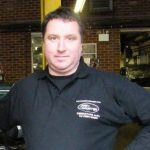 Jonathan Daunter, 50, was fighting alcoholism which led wife Kim to shut him in the steel shed so she could go shopping without risking a relapse. The car business owner started a motorbike engine kept in the container and blacked out from the fumes. A coroner said it is not know why Jonathan turned the bike’s engine on.

He was found unconscious when his family returned an hour later and died from carbon monoxide poisoning a later that day, the inquest heard. Police ruled out foul play after investigating the death, finding no evidence Jonathan had been forced into the shed behind the family home in Chepstow, South Wales.

The coroner also ruled that he did not intend to take his own life. Kim, 44, said she needed to go shopping in Bristol but was worried about Jonathan’s safety. She told police: ‘I dare not take him because he could jump out of the car to go and get alcohol because of being desperate to get drunk. ‘He had water and warm clothes in there. ‘We locked him in there to make sure he would not go off and get alcohol. We were gone about an hour.

’ The inquest heard Jonathan had a ‘long-standing dependency on alcohol and had relapsed after seeking help’. Jonathan’s wife Kim locked him in the shed for his own protection, the inquest heard (Picture: Wales News Service) Gwent coroner Caroline Saunders said his alcohol dependency had ‘contributed but did not directly cause the death’. ‘At some point Mr Daunter started the motorbike. The reason for this is unknown. ‘He died as a result of being in an enclosed area with a running vehicle.’ Jonathan ran a breaker’s yard where he kept old farming machines, 4x4s and motorbikes, and appeared on BBC’s Countryfile.

Speaking at the time of his death, Jonathan’s family said: ‘On Saturday 11 Feb Jon was involved in an tragic accident that proved to be fatal. ‘As you imagine we are all devastated. We would like to take this opportunity to thank all our friends and customers for their ongoing support.’

The post Man Dead After Wife Locked Him In A Shed appeared first on Independent Newspapers Nigeria.