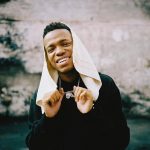 Having conquered the very discouraging music industry in his home country, popular Zimbabwean musician, Ngonidzashe Dondo, better known by his stage name, King 98, thought it pertinent to expand his music frontiers by coming to Nigeria to have a feel of the music ambiance and equally promote his brand of music which he has refused to define because he is a versatile artiste with no boundaries.

Speaking on his mission to Nigeria the music youngster said; “I love it here and it’s been cool; everyone is friendly. In terms of the music vibe, Afro-beat is dominating, not just locally but globally. I spend my time listening to Afro-beat now than hip-hop because of the manner of beats that are being made, the production, and the collaboration levels. Also, Burna Boy, Wizkid and the rest being on Beyonce’s album, so you see they are breaking out. Nigerian artistes are the ones at the forefront pushing African music to the world.”

While describing the Nigerian music industry as the strongest and most viable in Africa; the young superstar who is still riding on the crest of his album titled ‘Francesca’; released earlier in the year stated that contrary to popular belief, Davido and many other Nigerian musicians are very humble people.

“The strongest music industry in Africa is Nigeria and it’s also the friendliest. I remember I made a song with Davido. When I met Davido, the connection I made with him was easy compared to other artistes I’ve met back home in Zimbabwe. So, the love that Nigerian artistes have for entertainment is something else. I met him the first day, the next day we’ve made the song and shot the video. That was like very easy. When you see them on TV, they are like superstars but in person, they are very humble people. It’s easy to work with them. Even to the producers; I’ve worked with Speroach and I might work with Kelechi Ngezo. That’s just why I like working with Nigerians”, he said.

Speaking on why it is so difficult to be hit limelight on the Zimbabwean music industry, the ‘Shoko’ crooner said; It’s difficult because we don’t have a lot of numbers compared to Nigeria and South Africa, where there are enough artistes and music is supported. Music is not really a big thing for us because it’s not valued. Only a few musicians have made it to limelight.