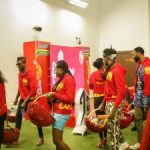 …As all housemates are declared winners

It’s a no brainer that Indomie noodles, one of Nigeria’s favourite household names are the most frequently consumed food among the BBNaija #Pepperdem housemates.

And so when Indomie Nigeria featured in this season of Big Brother Naija on the 7th September 2019, we knew without a doubt that it would be a delicious treat for the #pepperdem housemates as well as the fans.

Indomie’s feature mainly revolved around two arena games; a jigsaw puzzle and cooking competition, which were spearheaded by the Indomie taskmaster- Don Jazzy.

Prior to the day, viewers and the housemates’ fans were asked to create a personalized ingredient basket.

These ingredients were then compiled in personalized #MyIndomieMyBBNBasket to the delight of our pepper dem housemates.

Our well-DON Indomie taskmaster visited the big brother house in grand style, baring surprise baskets that the housemates needed to complete their task.

To put all the pieces of the day together, the Indomie in BBN task was in three stages. First, they were given boxes filled with a jigsaw puzzle. They had to pick an Indomie-variant-themed jigsaw puzzle pack and arrange the puzzle pieces on a board with a countdown timer.

Upon completing the Jigsaw puzzle challenge, they were given number cards which would determine how they took turns at the kitchen for their next task.

Next, they were given their personalized #MyIndomieMyBBNBaskets to prepare a delicious bowl of Indomie in their style, using only the contents of their baskets.

The last step of the task was to present their meal at the arena to the Don Jazzy, the Indomie taskmaster in their personal style, whether by singing, rapping, dancing, acting etc. for the ultimate prize!

It’s safe to say that the My Indomie My BBN Task was very unique and personal to each housemate.

Because everyone is unique and so their styles of cooking Indomie noodles would be impossible to judge as better than another. Thus the Indomie decided to award the prize to all the housemates to share amongst themselves because they all did amazing jobs presenting their Indomie noodles in their style. This left a shocked, happy, exasperated reaction from each of our grateful pepper dem housemates.