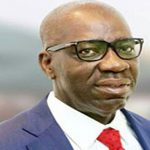 ABUJA – Governor Godwin Obaseki of Edo has mandated his aides and all state actors in the Edo henceforth not to engage Comrade Adams Oshiomhole, National Chairman of the All Progressives Congress (APC) or his sidekicks in hostile brickbats.

Instead the Edo State chief executive said he has opted to toe the path of peace and reconciliation in resolving all disputation in the interest of people of the state.

Recall that that the APC national chairman had in an interview he granted vowed never to accept Frank Okiye, the disputed Speaker of Edo State House of Assembly as such.

While maintaining that he has no personal issues with the governor, he however insisted that the action of Gov Obaseki to inaugurate the state assembly at 9.30pm and installing Okiye was capable of truncating the nation’s democracy.

But in the statement signed by his Special Adviser Crusoe Osagie and Paul Ohonbamu, Commissioner of Communication, on Monday, the governor said Edo State government has taken notice of the hostile statement credited to the APC national chairman and which was widely published across all media platforms.

He also noted that the onslaught has elicited widespread call by Edo State stakeholders, demanding a strong response, but added that he had chosen to pursue the course of peace and reconciliation in handling the issues.

“The Edo State Government observed over the weekend, leading to this week, very hostile statements credited to our revered National Chairman, Comrade Adams Oshiomhole, across the various media platforms, including radio, television, newspapers and the social media.

“This onslaught against the governor and government of Edo State, widely publicised, has also been trailed by enquiries about the state govemment’s response to these attacks, from various stakeholders, both within and outside the country.

“Consequently, the Edo State Governor, Mr Godwin Nogheghase Obaseki, has instructed that no state actor, within Edo State Government, should make any comment whatsoever or join issues on the ensuing hostile comments and discussions.

“Obaseki said he has chosen to pursue the path of peace and reconciliation in dealing with these issues in the interest of the good people of Edo State and our great party, the All Progressives Congress (APC).”