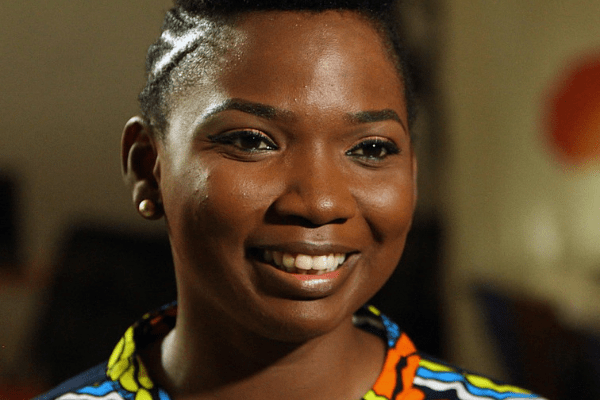 Abisoye Ajayi- Akinfolarin is a Nigerian woman and Girls Advocate/social Entrepreneur. She is the founder of Pearls Africa Youth Foundation, a Non-governmental Organisation aimed at educating young girls in under-served areas in Nigeria with technology skills. On November 1, 2018, Ajayi-akinfolarin was named one of ten CNN Heroes of the year. Later that month she was listed as one of BBC’S 100 Women.

Abisoye was born in Akure, the capital city of Ondo state in. She attended the Nigerian Institute of Information Technology (NIIT) and later attended the University of Lagos, where she received a BSC in Business Administration.

Ajayi- Akinfolarin began her career working for E. D. P Audit and Security Associates. She worked at the company for seven years, beginning as an intern and being promoted to the level of Associate Consultant.

Working in technology, AjayiAkinfolarin discovered a large gender gap. A government survey conducted in Nigeria in 2013, found that less than 8% of professional, management or technological positions are held by Nigerian women. Wanting to help close that gap and encourage more women in her field, Ajayi-akinfolarin established her own non-profit organisation.

In 2012, Ajayi- Akinfolarin founded Pearls Africa Youth Foundation, a Non-Governmental Organization that assists girls in developing technology skills through various programs including; Girlscoding, G.C Mentors, GIRLSINSTEM and Empowered Hands. Since 2012, the organisation has trained over 400 young women to code.

Growing up was tough for her, after losing her mother at the age of 4, and being regularly beaten by her father. In her words, “Life was just crazy, I learned to fend for myself.”

The first time she came in contact with a computer was when she was 10, on a school break, at a business centre run by her brother’s friend. “Learning to type and modify text in Microsoft Word was

just beautiful. But I really discovered my love for computers when I joined an IT firm as an intern after high school. When I got introduced to the world of computer programming, I was just natural with it. It just flowed. It’s all about solving problems. I never knew that I’d be looking for solutions to problems regarding less privileged girls. That is what Girlscoding is all about.” She said.

The story of Sharon Okpoe is one that always inspires Abisoye. Sharon lived in Makoko for 17 years. Speaking to CNN, she says “When I went to Makoko for the first time, I was surprised to see the living conditions of human beings. Most girls are trapped in a vicious cycle of poverty. Many of them are not thinking education or a plan for the future. Technology is a space that’s dominated by men. Why should we leave that to guys? I believe girls need opportunities.”

Abisoye is passionate about a project called Hope Baskets. According to her, the girls wanted to get beggars off the streets, so they created a website to be a bridge between the rich and the poor. “They wanted a way where someone can declutter their house and give them a call. Then they take what they’re getting rid of; food, clothing, educational materials, and give it to those in need.” She stated.

That is not all. There is another project called Break The Blade and according to her, the project is about stopping female genital mutilation. In her words, “These girls believe there is a lot of ignorance about this and want to be ambassadors on this issue. Eventually, they want to have a wrist band where you can press a button and it calls local authorities to come if FGM is about to take place.”

It is Abisoye’s hope that girls will not only be users of technology but creators of technology. “We want girls to be creators of tech, not mere users. Watching them write code is beautiful. Many of them never touched a computer before they got here. It’s mind-blowing. The joy on their faces, that’s more than money. I can’t buy it.” Abisoye revealed.