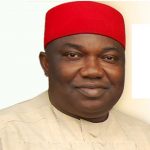 ENUGU – Governor Ifeanyi Ug­wuanyi of Enugu State has reiterated his administra­tion’s commitment to elim­inating all forms of crime and insecurity in the state.

He stated this on Thurs­day in Enugu during the swearing-in ceremony of the 2019 Batch ‘B’ Stream II corps members deployed to the state.

The governor, who was represented by the Secre­tary to the State Govern­ment, Professor Simon Or­tuanya, said that the state remained safe in spite of recent security challenges.

Ugwuanyi assured the corps members of their safe­ty in any part of the state they would be deployed for their primary assignment.

He said: “I want to as­sure you of the determina­tion of this administration in combating crime and eliminating insecurity in any guise in the state.

“The ongoing recruit­ment of 1700 forest guards to complement the efforts of law enforcement agents is a testimony to our resolve in keeping the state safe.

“You are, therefore, safe in any part of the state you may be posted for your pri­mary assignment after the orientation course,” he said.

The governor said that he had unwavering faith in the National Youth Ser­vice Corps (NYSC) scheme, adding that the state gov­ernment would continue to provide the enabling en­vironment for it to thrive.

He said: “The NYSC call-up is a clarion call to self­less service and personal sacrifice.

“We will continue to give the welfare of corps mem­bers posted to the state pri­ority attention. This we be­lieve will motivate them to discharge their mandates successfully,” he said.