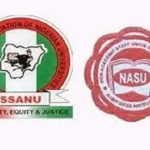 ABUJA – The warning strike em­barked upon by the Senior Staff Association of Nige­ria Universities (SSANU) and Non-Academic Staff Union of Universities and Associated Institutions (NASU) may have yielded some results as the feder­al government has given a directive that all affected staff salaries be main­streamed into the payroll system immediately.

Beyond this, the gov­ernment has agreed that the budgetary framework is harmonised in the 2020 appropriations Act, to effect smooth implemen­tation.

He explained that the directive was sequel to a 2016 judgement of the National Industrial Court compelling the govern­ment to pay the liabilities in accordance with the La­bour Act.

In a circular dated 20th August 2019 addressed to the Vice-Chancellor and signed by a Director in the Executive Secretary’s office, Chris Maiyaki, the National Universities Commission (NUC) di­rects the VC to liaise with the Ministry of Finance and the Office of the Ac­countant General of the Federation for the release of funds for the payment of arrears of salaries of the affected workers.