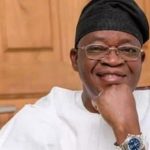 Osun State Governor, Adeg­boyega Oyetola has charged corps members to imbibe the virtues of hard work, pa­tience and humility during and after the service year.

He urged the corps mem­bers deployed to the state to complement the gestures of the National Youth Service Corps (NYSC) and the govern­ment by being good ambassa­dors and advocates of peace­ful co-existence in Nigeria.

Governor Oyetola spoke on Thursday, at the Official Opening and Swearing-in Ceremony of the 2019 Batch ‘B’ Stream ll Orien­tation Course at the NYSC Permanent Orientation Camp, Ede, Osun State.

He called on the corps members to live up to the scheme’s objectives of fos­tering bridges of love, har­mony and productive inte­gration across the country.

Oyetola , who was repre­sented by the Secretary to the State Government (SSG), Prince Wole Oyebamiji ad­monished the corps mem­bers to channel their energy, vigour and drive towards the achievement of national lofty ideals and aspirations.

He warned them to ab­stain from vices such as drug abuse, advance fee fraud, kidnapping, rob­bery, cultism, violence and cyber-crimes.

Describing youths as the most productive segment of the Nigerian population, he submitted that the nation’s plans for the future cannot be actualised without the involvement and active participation of the youths.

He charged them to key into national policies and programmes designed to take the country to the next level of socioeconomic and political development.

While pledging his ad­ministration’s commit­ment to continue to ensure the welfare and improved standard of living for corps members deployed to the state, Oyetola urged them to see Osun as ‘home away from home’, saying, “Our people, as you will find out for yourselves, are hospita­ble, friendly and caring”.

He called on the corps members to put on their thinking cap right from the camp by initiating meaningful community development projects in their respective places of primary assignment.