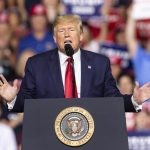 Donald Trump will quit the 2020 race and not seek re-election, according to a former top aide.

Anthony Scaramucci, the short-lived White House communications director, said the president will likelu quit the race in March to avoid the humiliation of defeat.

“He’s got the self-worth in terms of his self-esteem of a small pigeon. It’s a very small pigeon. And so you think this guy’s gonna look at those poll numbers and say — he’s not gonna be able to handle that humiliation.”

He also encouraged a primary challenger to take on Mr Trump, using a Game of Thrones analogy to make his case.

“You know, this is like ‘Game of Thrones.’ We need an Arya Stark, okay? We gotta take this guy out because this is like the Night King.

In recent weeks, Scaramucci has escalated the feud with his old boss, saying Mr Trump would eventually “turn” on the “entire country”, and likening him to the Chernobyl nuclear disaster.

He also claimed this week that Twitter temporarily locked him out of his account after he called Mr Trump “the fattest president” after the president fat-shamed a protester.

Mr Trump has previously hit back at Scaramucci, saying he was “incapable” of handling his White House role – which lasted just a few days – and would “do anything to come back in”.

The post Trump To Drop Out Of 2020 Race Within Months appeared first on Independent Newspapers Nigeria.