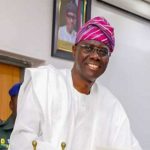 Lagos – Babajide Sanwo-Olu, the Lagos State governor, on Tuesday transmitted the final list of his cabinet nominees to the State House of Assembly, with Joe Igbokwe, the state’s All Progressives Congress (APC) Publicity Secretary, making the list.
The final list was submitted four weeks after the governor sent the first batch of the commissioner-nominees to the lawmakers for screening.
According to a statement by Gboyega Akosile, Sanwo-Olu’s Deputy Chief Press Secretary, 13 commissioner and special adviser-designates made the second list.
Akosile said the second list had names of accomplished politicians and technocrats who “understand the current needs of Lagos” and the development agenda of the governor.
He said the selection process was rigorous because of the need to constitute the best team that would serve the state in line with the administration’s vision of delivering a city-state that would rank among the top most liveable cities in the world.
Apart from Igbokwe, others on the list are Oladele Ajayi, Oluwatoyin Fayinka, Mrs. Yetunde Arobieke, and Olanrewaju Sanusi.
Also included are Bonu Solomon Saanu, Kabiru Ahmed, Mrs. Lola Akande, Prince Anofi Olanrewaju Elegushi, Mrs. Solape Hammond, Moruf Akinderu Fatai, Mrs. Shulamite Olufunke Adebolu, and Tokunbo Wahab.
The list did not specify those to be named commissioners or special advisers.
Igbokwe, who had been part of the Lagos State government, was a cabinet member during the administration of former Governor Bola Tinubu, and had headed some agencies during the administration of Babatunde Fashola and Akinwunmi Ambode.
Before the current appointment, Igbokwe was in charge of the government’s special committee which controlled ports revenue.
Meanwhile, the Lagos State chapter of the All Progressives Congress (APC) has commended Gov. Babajide Sanwo-Olu for including “tested party men” in his additional list of commissioner and special adviser nominees.
The Assistant Publicity Secretary of the party in the state, Abiodun Salami, gave the commendation in an interview with newsmen on Tuesday in Lagos.
Salami reacting to the development described the second list as a perfect blend of tested politicians and competent professionals.
He said the list reflected Sanwo-Olu’s appreciation of commitment and loyalty to the party, as well as expertise to move the state to the next level.
The assistant publicity secretary added that the chapter was particularly glad about the nomination of its spokesman, Igbokwe, as well as Arobieke, saying the duo and others would deliver.
“We commend the governor for giving us a perfect mix of technocrats and professionals on the new list.
“The new nominees, just as those in the first list, are competent people who will help realise the goal of a better Lagos.
“We are glad that the governor has included our spokesman, Mr. Igbokwe and other core party men who have always worked for the progress of APC in the state.
“With this list and the initial one, Lagos is definitely going to be a better place.
“We congratulate the governor and the new nominees. We wish them all the best,” he said.