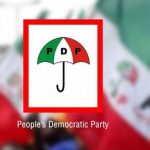 Abuja – The Peoples Democratic Party (PDP) on Tuesday charged the hierarchy of the Army, the Police and the Department of State Services (DSS) to speak out on the abduction of its Okene Local Government Area Chairman, Musa Adelabu, by gunmen reportedly dressed in military fatigue.
The party, in a statement by its spokesman, Kola Ologbondiyan, expressed worries that three days after his abductors reportedly told his family members that they were acting on orders from above, there had been no trace of his whereabouts.
“Moreover, it is completely unacceptable that since the public outcry by our party and members of his family over his violent abduction, and despite the demand for his release, the high commands of the military, the police, and the DSS have failed to speak out on the matter.
“This situation has heightened apprehensions of high-level partisan conspiracy to use some compromised security operatives against the opposition in Kogi State, in a desperate bid to foist the All Progressives Congress (APC) and the failed Governor Yahaya Bello on the people of Kogi State.
“Already, there is an ominous tension in Kogi State following intelligence reports filtering into the public domain that our LGA chairman is being tortured by his captors in a secret facility where his life is now in great danger,” the party stated.
It added: “Such provocative situation is capable of sparking off serious crisis in Kogi State, which location as gateway and convergence state, means a lot of dire consequences for our nation, in the event of any disturbances in the area.
“It is, therefore, completely unacceptable that the security high command is not forthcoming with concrete statement or decisive action to secure his release despite calls by our party and the people of Kogi State.”
The party called on President Muhammadu Buhari, as the commander-in-chief of the armed forces, to address his charade and ensure the release of the Kogi PDP leader.