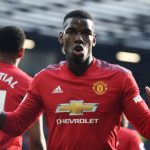 Real Madrid have been told by Manchester United that even an offer of €200m would not be enough to tempt them to sell Paul Pogba this summer.

The France midfielder was expected to leave Old Trafford for Real this summer, but the Spanish club look set to miss out with United digging their claws in over their prized asset.

Pogba, who set up Marcus Rashford for his second goal against Chelsea with a brilliant long-range pass, had told French radio station RMC Sport over the weekend that there were still doubts over whether he will stay at United.

“I always feel good when I play football. I do the things I like, plus it’s my job. I give my all every time I go out on the pitch,” he said.

“I’m aware that things have been said. Only time will tell. There’s always that question mark.

“I’m at Manchester. I have fun with my team-mates, I always want to win matches and I always give my best when I’m on the pitch.”

However, reports on Tuesday claimed there has been a significant shift in the player’s thinking and they believe that Pogba has now been convinced to stay.

Furthermore, and according to AS, United appear determined not to sell Pogba under any circumstances this summer and are said to have informed Real through intermediaries that they would not consider selling him even in the wake of a £185m (€200m) offer from the LaLiga giants.

It promises to be a frustrating end to the summer for Real, with another midfield target, Donny Van De Beek, also expected to stay at his club, Ajax, for this season at least.

“I guess and I hope that he stays with us this season,” coach Erik Ten Hag said on Tuesday. “Otherwise, I will hear from [Ajax’s director of football] Marc Overmars.”