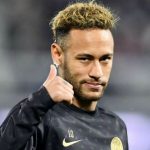 BARCELONA are aiming to bring Brazilian superstar Neymar back to the Nou Camp before the Spanish transfer window shuts.

Neymar’s time at PSG is seemingly over with former club Barcelona the current frontrunners to secure the forward’s signature.

The 27-year-old’s potential return to the club where he spent four successful seasons would be a massive piece of business by the Catalan giants who have already significantly strengthened their squad.

The reigning La Liga champions have already added World Cup winner Antoine Griezmann and Dutch midfielder Frankie de Jong to their ranks, but the addition of Neymar would be the biggest deal yet.

He has already shown how effective he can be alongside Lionel Messi and Luis Suarez, so how could Barcelona line up with Neymar back at the club? Here, Express Sport takes a look.

Nelson Semedo is expected to start the season at right-back ahead of makeshift defender Sergi Roberto, while experienced left-back Jordi Alba will retain his place in the starting line-up.

Barca stalwart Gerard Pique will continue to be an ever-present in the heart of defence and, after impressing last year, he will likely be partnered by Frenchman Clement Lenglet.

Lenglet’s countryman Samuel Umtiti has fallen out of favour recently, having failed to pass 40 appearances in all competitions last season for the first time since moving to Spain in 2016.

The potential addition of Neymar would force manager Ernesto Valverde to ditch his favoured 4-3-3 formation in order to play the Brazilian alongside current forward stars Messi, Suarez and Griezmann.

The 55-year-old may opt to go with two holding midfielders in the form of Sergio Busquets and new signing De Jong.

Ex-Ajax star De Jong looks to be the long-term replacement for Busquets, who is now into his thirties, but the Holland international could start the season alongside the Spaniard if Neymar returns to the Nou Camp.

Barcelona do have the likes of Ivan Rakitic, Arthur, Arturo Vidal and Sergi Roberto amongst their ranks but vice-captain Busquets and new boy De Jong will likely be favoured to anchor the midfield.

With a dearth of attacking riches already at the club, Neymar would slot right back into the left-wing position which he made his own before leaving for PSG.

Suarez will continue to lead the attack with talisman Messi drifting in from the right.

Ex-Atletico Madrid forward Griezmann would likely slot in just behind Suarez in the number 10 role to complete one of Europe’s most fearsome attacking line-ups.

How Barcelona could line up this season

The post How Barcelona Could Line Up With Neymar If Deal Is Confirmed appeared first on Independent Newspapers Nigeria.