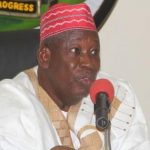 Kano – Madakin Kano, Yusuf Nabahani, the district head of Dawakin Tofa, and Governor Abdullahi Umar Ganduje’s district head, on Monday, joined ten of his colleagues to grace the Kano Emirate durbar in disobedience to the governor’s order.
The others, who attended include Dan Amar Aliyu Harizimi Umar of Doguwa, Dokaji Muhammadu Aliyu of Garko, Makama Sarki Ibrahim of Wudil, Sarkin Fulanin Ja’idinawa Buhari Muhammad of Garun Malam, and Barde Idris Bayero of Bichi.
Others are Sarkin Bai Mukhtar Adnan of Danbatta, Yarima Lamido Abubakar of Takai, Dan Isa Kabiru Hashim of Warawa, Dan Madami Ibrahim Hamza Bayero of Kiru, and Sarkin Dawaki Mai Tuta Bello Abubakar of Gabasawa.
Ganduje had on Sunday issued an executive order to counter an earlier order by Emir Muhammadu Sanusi II inviting district heads from all 44 local government areas in Kano to attend the Hawan Daushe in Kano City.
A statement issued by Abba Anwar, Chief Press Secretary to the governor, and obtained by Daily Independent, directed the district heads to shun Emir Sanusi’s invitation.
Anwar, in a strongly worded statement, said only district heads under the jurisdiction of the Kano Emirate should attend the Hawan Daushe at Kano, while district heads in the four new emirates created by the Ganduje administration should attend the durbar at their respective emirate capitals.
Checks by Daily Independent showed that the 11 district heads that attended the Kano Hawan Daushe on Monday were traditional rulers whose allegiance were to the Kano Emirate and were also in court to upturn their new status.
The district heads’ defiance of the governor’s order would be a continuation of the running battle between Ganduje and the 19th Fulani emir of Kano, Sanusi II.
In May 2019, Ganduje divided Kano Emirate into five territories and appointed four first class emirs to lead the new emirates, and in one fell swoop excised 34 local government areas from the traditional territory of Sanusi II.
The Ganduje administration is accusing the emir of supporting its political opponents, an allegation he has always denied.
Shortly after the balkanisation of Kano Emirate, Ganduje attempted deposing the emir but the timely intervention of some influential citizens saved the day.