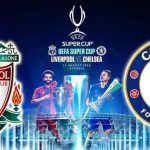 Liverpool and Chelsea will this week face off in the first ever all-English UEFA Super Cup.

Ahead of Wednesday’s match, PA takes a look at five of the main talking points ahead of the Besiktas Park clash.

Historic moment for women’s football
“I hope it serves as an example to female referees, and to any young girls who may aspire to be a referee.”

Stephanie Frappart will write her name in the history books on Wednesday as she becomes the first female referee to officiate a UEFA men’s competition event. Assisted by Manuela Nicolosi and Ireland’s Michelle O’Neill, the decision has been welcomed by Chelsea boss Frank Lampard, Liverpool manager Jurgen Klopp and players from both teams. A momentous occasion, O’Neill hopes it can be an inspiration to young girls across the world.