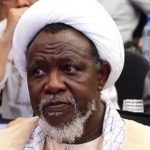 Abuja – Followers of Ibrahim El-Zakzaky have accused the Federal Government and American secret agents of frustrating the medical treatment of their leader at Medanta Hospital in New Delhi, India.
El-Zakzaky departed Nigeria on Monday to India aboard an Emirates Airlines plane and was accompanied by officers of the National Intelligence Agency (NIA) and his family members.
Members of the Islamic Movement in Nigeria (IMN), however, alleged on Tuesday, via a statement, that there was an ongoing plot to frustrate the treatment.
The statement was signed by the Secretary of Academic Forum of the movement, Abdullahi Musa.
The statement noted that the security agents who accompanied El-Zakzaky and his wife had colluded with American security agents and had threatened the management of Medanta Hospital not to admit him for treatment.
The group added that the agents, allegedly working with the American Embassy in India, had perfected strategies to frustrate the medical treatment.
The statement reads in part: “Reports reaching us from the hospital indicate that the security agents are colluding with foreign security agents believed to be working for the American government.
“Earlier, even before the Sheikh arrived the hospital, we gathered from competent source that officials of American embassy in India instructed management of the hospital not to admit the Sheikh there for treatment.
“The source added that even as the doctors were enthusiastically waiting to receive the Sheikh to save his life, the American secret agents have threatened the hospital officials not to go ahead to treat the Sheikh at the hospital.”
The sect, however, called on the international community and the people of conscience to prevail on the Federal Government to stop playing with the life of their leader and allow him access to treatment.
“We are also calling on the international community and people of conscience and humanity, especially those that facilitated the travelling of the Sheikh to India for treatment, to prevail on the Nigerian government and its western masters to stop playing with the life of the innocent leader who is victim of their continuous plot to ensure that he dies,” the group added.
El-Zakzaky was received in India by a team of doctors on his arrival at the airport and taken into a waiting mobile intensive care ambulance.