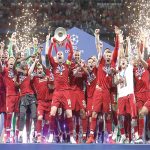 Liverpool will be looking to win their fourth European Super Cup in the club’s history as they play Chelsea at Istanbul.

Liverpool fans will be returning to the city where THAT night in Istanbul happened 14 years ago.

The UEFA Super Cup will be held at the Vodafone Park – some 20 miles from the Ataturk Olympic Stadium where they won the Champions League against Milan in stunning fashion.

Many will be hoping for another memorable night as the Champions League winners compete against Frank Lampard’s Chelsea.

Thepools.com have placed the Reds as 3/10 favourites against their rivals and put Jurgen Klopp’s side 2/1 to win to nil too .

Here is a breakdown of the Reds’ history in the competition:

May 25 1977 (L-R) Liverpool’s Ray Kennedy, Terry McDermott and Jimmy Case celebrate with the European Cup
Liverpool competed in the contest for the first time after winning the European Cup in 1977. They entertained European Cup Winners’ Cup holders Hamburg.

The match had a bit more spice to it in the build-up as forward Kevin Keegan would play against the team he lifted the European Cup with just a few months ago, with his new German side.

Fairclough and Kenny Dalglish found the net late on too.

Kenny Dalglish celebrates with the European Cup
After back-to-back European Cup wins, Liverpool missed out on the chance of becoming Super Cup holders too.

Despite a Jimmy Case equaliser in the first-leg, Anderlecht set up a tough challenge for the Reds to swing a two-goal deficit at Anfield.

The Reds started strongly with Emlyn Hughes giving Liverpool an early lead in the second leg but Anderlecht restored their two-goal lead with 20 minutes left to go.

Once again, Fairclough found the net but it was too little too late for the Reds finished the contest runners-up.

Liverpool came into the contest as European Cup winners for the third time but due to fixture congestion on their part, the competition could only be arranged in January 1985 and for one leg only.

The Liverpool team celebrate after winning the UEFA European Super Cup final against Bayern Munich played at the Stade Louis II Stadium in Monaco (Image: Michael Steele /Allsport)
After nearly 20 years without any success in Europe, Liverpool returned to the competition in the new millennium as UEFA Cup winners.

The Reds played a thrilling UEFA Cup final against Deportivo Alaves which ended 5-4.

Owen and his strike partner Emile Heskey found the net to give the Reds a three-goal advantage.

Despite a fightback from Bayern Munich, the Reds held on and won their first Super Cup since 1977.

Liverpool celebrate after winning the UEFA Super Cup football match Liverpool vs CSKA Moskva
A dramatic finish seemed fitting for this competition after an incredible display in Istanbul against Milan a few months earlier.

CSKA Moscow were leading for most of the match until substitute Djibril Cissé equalised to send the match into extra-time.

The Reds came out victorious after Cissé scored his second of the match and Luis Garcia finished off the match to give Liverpool their third Super Cup trophy.

An all-English affair this time round.

Liverpool come into this tournament as Champions League winners and will play Europa League holders Chelsea.

This will be the eight time the Super Cup will be contested between domestic rivals.

Thepools.com has placed Mo Salah and Chelsea’s new recruit Christian Pulisic to both score at 12/1 as well as both teams to score at 4/6 too.