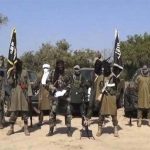 As Nigerian troops continue the battle against terrorists, it emerged on Tuesday that four brave Nigerian soldiers had died while defending the nation against unrelenting Boko Haram attacks in Borno State.
According to the reports, the Nigerian Army 5 Brigade in Gubio late on Saturday came under attacks while preparations for Eid-el-Kabir were on.
The troops were said to have fought valiantly against the onslaught of the heavily funded Boko Haram but suffered setbacks.
Some military equipment were reported to have fallen into the hands of the attackers, among these are four gun trucks, one mortar gun, and one artillery gun.
Nigerian troops reportedly recovered a tank later around the bushes.
The attack may have compelled the troops’ commanders to move the 5 Brigade from Gubio, about 100 kilometres from Maiduguri, to Damasak, where the military operates a larger camp.
A military source was quoted as saying that there were no more troops in Gubio, Magumeri, and Kareto.
He was said to have voiced fears that the entire stretch between Maiduguri to Damasak, which is over 160 kilometres, was now without military presence and may be vulnerable to attacks.
A group of oil explorers from the Nigerian National Petroleum Corporation (NNPC) were reportedly killed on that route in 2017.
Word on the latest attack has, however, not come from military authorities yet.