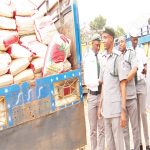 The Niger/Kwara/Kogi Command of the Nigerian Customs service has warned smugglers to give up as the command has been repositioned through its aggressive anti-smuggling response to curtail them.

Making this known yesterday was the Customs Area Controller,Abba-Kassim Yusuf while addressing the press on the command’s achievements recorded so far.

Yusuf said the command’s achievements was propelled by the Controller General of Custom’s zero tolerance to smuggling.

He said:” I urge you all to spread the gospel to them, to steer clear of the Command, as no stone will be left unturned. It will be a negative story to them because we are positioned to seal off and check all excesses of their smuggling activities.

“The Command will play a positive role to those who are ready to carry out their legitimate businesses, as Trade facilitation is one of my cardinal points; the Command is ever ready to support the stakeholders who are ready to follow the laid down rules and regulations of the service”. He explained.

Yusuf said the Command is not relenting in its efforts to surpass its recorded successes last year, since his assumption of duty as the Customs Area Controller.

“Like any other month, the Command was able to surpass the monthly target with Thirty Two Million Six Hundred and Eighty Five Thousand Seven Hundred and Fifty Five Naira Two Kobo (N 32,685,755.2).

“The Command made seizure of other items such as sugar, used tyres, vegetable oil, foot wears etc with duty paid value of N 281,320,000.