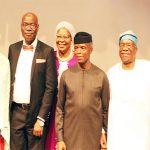 If Nigeria is committed to the attainment of self-sufficiency in food production, all hands must be on deck to ensure that the right mechanisms to achieve this are put in place.

This was the major thrust of the just concluded 4th National discourse, organised by ‘The Companion’, an association of Muslim Men in Business and the Professionals with the theme: “Food security: Unleashing Nigeria’s Natural Potentials for Self Sufficiency’ held at the University of Lagos, (UNILAG), Akoka.

Nigeria’s Vice President, Professor Yemi Osinbajo while speaking at the summit called on state governments to join hands with the Federal Government to make meaningful contributions to agricultural development in order to achieve self-sufficiency in food production.

According to him, President Muhammadu Buhari has set a clear direction on self-sufficiency and food production and urged Nigerians to produce what they eat and consume what they produce, saying this was informed the decision of the federal government to set a substantial budgetary allocation to agriculture.

“Self-sufficiency in food production has been the major pillar of our administration’s economic policy; President Muhamadu Buhari actually set a clear direction on the issue of self-sufficiency in food production. When he said that we must eat what we produce and must produce what we eat and we must consume what we produce. And we backed that with substantial budgetary allocation to agriculture.

Speaking further, Osinbajo also emphasised the need for states to contribute meaningfully to agriculture to complement in the same vigour the Federal Government has been driving the sector in order to achieve the nation’s quest for self-sufficiency.

“We also need the states to contribute to agriculture in the way that the Federal Government is driving agriculture in order to achieve the self-sufficiency that we intend at achieving,” he urged.

“The Anchor Borrowers Programme of the Federal Government has given credit totalling N120.6billion to small scale farmers, where most of them had cultivated 12 different commodities such as rice, wheat, soya beans, poultry and others across the 36 States. “The programme is now digitised and all farmlands involved are GPRS mapped. Thus, we know where the farms are because biometric data of the farmers were captured, electronic cards have been issued to every one of them and all the specific tools delivered were recorded, this has enhanced the traceability and enhanced productivity, so the farmers could be tracked, “he stated.

The Vice President added that government had launched the fertilizer programme to improve local blending capacity, in collaboration with the government of Morocco, noting that today, Nigeria has 11 fertilizer blending plants, with a total capacity of about 2.1million metric tonnes, this he said had rubber off by reducing the cost of 50kg bag of fertilizer from N13,000 to N6,000.

Ogbeni Rauf Aregbesola, former Governor of Osun State, who Chaired the event in his opening remarks, said that the only way to address poverty was to encourage the youths to go into farming.

According to him, insecurity had been traced to hunger, which in turn breeds frustration and aggression, adding that it was easy to mobilise hungry people for rebellion and any form of criminal activities.

Aregbesola noted that the nation needed enhanced farming techniques, as well as creating an enabling environment for farmers to have access to loan.

Professor Fola Lasisi, President of the Nigeria Academy of Engineering and Guest speaker in his presentation revealed that Nigeria had always considered herself as the giant of Africa, yet the people are hungry, poor and malnourished, saying food insecurity was a major issue of concern.

He urged the government to go back and deploy technology to create happiness for the people.

He called on stakeholders to join hands with the government to empower the young ones to fight hunger that is ravaging the land.

In her remarks, Engr. Noimot Salako-Oyedele, Ogun State Deputy Governor, said that the hosting of the event was a symbolic representation of the fact that professionals with the same religious beliefs could live up to the responsibility of spiritual upliftment of their members, while at the same time awaken them to their roles in nation-building.

She added that the Prince Dapo Abiodun led administration understood the importance of collective responsibility to nation-building, hence the adoption of the mantra, “Building our Future Together”.

“Our administration is committed to the Agricultural sector. We appreciate the capacity of agriculture as an avenue for massive employment generation and plans have reached an advanced stage for a scheme in partnership with the Federal Government called the Out-Grower Scheme.

“Under the scheme, 10,000 of our youths will be provided with land, inputs, farming equipment and guaranteed to buy back”, she stated.

Alhaji Thabit Wale Sonaike, National Amir of The Companion, a group of Muslim Professionals, urged the Federal Government to take more drastic measures towards combating insecurity in the country.

He said that this is important in order to give more confidence to farmers and guarantee food security for the populace.

He said that incidents of community invasion, banditry, kidnapping and armed robbery have become so rampant that lives and property are no longer safe, stressing that there can never be food security without adequate security for lives and property.

Sonaike stated that already millions of farmers have either been displaced from their farmlands or dispossessed of their farmland.

“All of these have a negative impact on food production and constitute a major threat to food security no matter the beauty of agricultural policy put in place.

While we commend the government on the decision to recruit 10,000 policemen, in a bit to combat this menace, it is unfortunate, however, that many years after this pronouncement; the recruitment is still in progress.

“What does it really take to recruit 10,000 policemen in the midst of millions of unemployed youth in the country? Those concerned should be called to order,” he advocated.

Citing a recent global report on the food crisis, Sonaike said that it was reported that no fewer than 113 million people experienced high level food insecurity in the world’s most severe food crises in 2018 and Nigeria was named as one of the eight countries in the world most affected.

“These eight countries accounted for two-thirds of the total number of people facing acute food insecurity, amounting to nearly 72 million people,” he said.

According to Sonaike, the report was rather ironical, especially against the backdrop of widely reported cases of the huge increase in local food production across various food crops like rice, cassava, sorghum, and maize, among others in the country due largely to various favourable agricultural policies put in place and implemented by the government at all levels.

“It is also curious that while it is acknowledged that Nigeria is the highest producer of yam and cassava worldwide, yet the country is categorised as a food insecure nation with heavy reliance on importation of grains, livestock products and fish.

“With a projected population of over 233 million by 2025, the concern for food security in the nearest future is palpable and calls for concern and immediate action by the populace and the government.”

He said that the group chose to focus on food security because food undoubtedly, is the most basic of all human survival needs and the starting chain of the economy as well as the base for daily life.